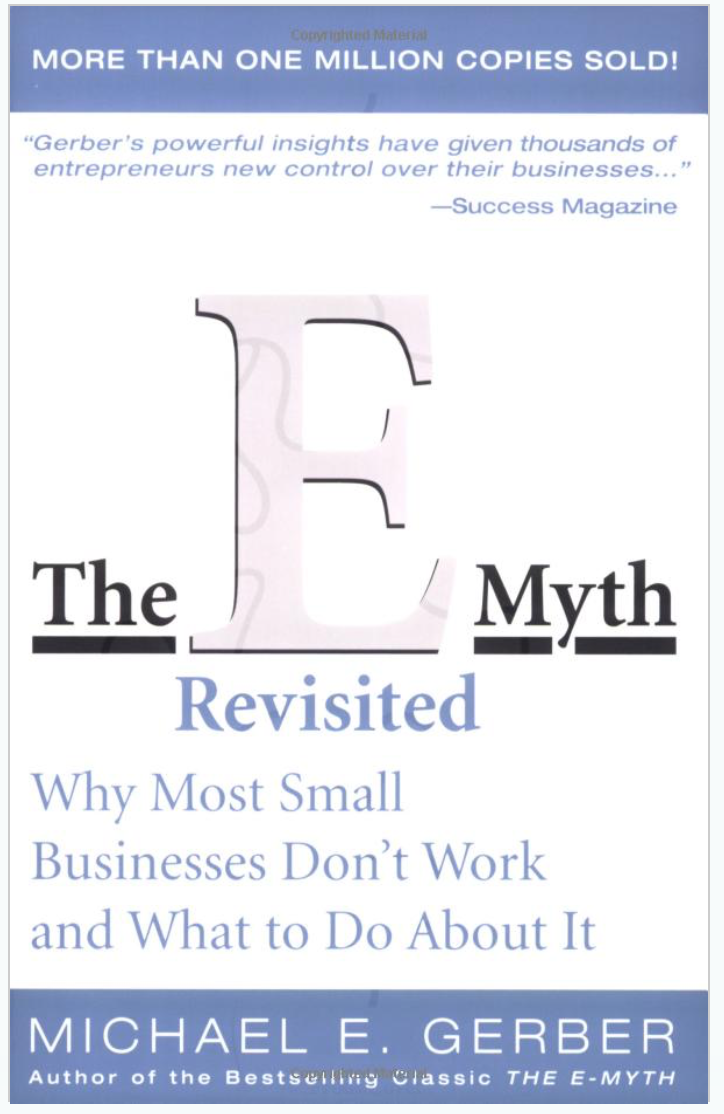 CLICK HERE to buy a copy of The eMyth Revisited by Michael E. Gerber

Just because you own a business doesn't mean you are a business owner.

In this episode, Steve introduces the Awesomers Book of the Week. Written by Michael E. Gerber, E-Myth and E-Myth Revisited talk about entrepreneurial management and leadership. Here are more awesome things you will learn from this episode:


So listen to find out why E-Myth and E-Myth Revisited should be on every business owner’s book list.

Welcome to the Awesomers.com podcast. If you love to learn and if you're motivated to expand your mind and heck if you desire to break through those traditional paradigms and find your own version of success, you are in the right place. Awesomers around the world are on a journey to improve their lives and the lives of those around them. We believe in paying it forward and we fundamentally try to live up to the great Zig Ziglar quote where he said, "You can have everything in your life you want if you help enough other people get what they want." It doesn't matter where you came from. It only matters where you're going. My name is Steve Simonson and I hope that you will join me on this Awesomer journey.

If you're launching a new product manufactured in China, you will need professional high-resolution Amazon ready photographs. Because Symo Global has a team of professionals in China, you will oftentimes receive your listing photographs before your product even leaves the country. This streamlined process will save you the time money and energy needed to concentrate on marketing and other creative content strategies before your item is in stock and ready for sale. Visit Symo Global to learn more. Because a picture should be worth one thousand keywords. You're listening to the Awesomers podcast.

Steve: Again Awesomers, this is Steve Simonson coming back to you for another episode. Today's episode is a book of the week episode from Awesomers.com and our episode today is episode number 8 so you can go to Awesomers.com/8 to see show notes and relevant details about today's episode. So I want to just give you a little context of the concept of the book of the week show. So my principle is I'm going to share some of the books that have been deeply meaningful to me and instrumental in my journey and also those who have recommended books around me, I may also you know include those as part of our reviews. However most of the time I will have read this book. From time to time we'll even bring on the authors of these books as well so we can talk about the thinking behind the book and here's firsthand some of their philosophies on a live basis. I'm anxious to see you guys feedback about this but I do believe that learning is a key part of being an entrepreneur and I've talked in the past about how important thought leaders and some of the brightest minds in our world think about learning and that all the guys from Elon Musk and Warren Buffett and you know Sheryl Sandberg and so many others talk about reading as a critical part of our kind of evolution as entrepreneurs and as people and this always goes back to that concept of equity. This is intellectual equity where we're spending. So without further ado, let's jump in here. So today's book of the week is one that I think has been very very important in my journey and I've recommended this book countless times, countless times. I can't even count them that's why I call it countless and in many regards this book has proven instrumental not only my life but some of the folks that I've referred it to, they've come back to me and said, “Gosh, you know that moment where you recommended this book and basically let us know that we need to improve, that was something important to us.” And this has happened more than one time, kind of to my surprise. I deserve no credit for it. All I'm saying is it was a good book for me and I think it could be a good book for you. Now I like to pay particular attention to the little headline on the book that says why most small businesses don't work and what to do about it. This is that concept of the E-Myth which was released back in the early 90s then as he says revisited in the late 90s. He sold millions of copies. This is one of the most foundation setting books that I know for entrepreneurs and by the way, the E in the E-Myth is that entrepreneurial myth. Fundamentally the philosophy of the book is just because we think we're entrepreneurs or business owners and CEOs doesn't mean we are until we learn it. So we're going to dig into this book a little bit but first, we're gonna take a quick break.

Catalyst88 was developed to help entrepreneurs achieve their short and long term goals in e-commerce markets by utilizing the power of shared entrepreneurial wisdom. Entrepreneurship is nothing if not lessons to be learned; learn from others, learn from us. I guarantee that we will learn from you. Visit catalyst88.com because your success is our success. Hey, giddy up. You’re listening to the Awesomers podcast.

Hey Amazon Marketplace professionals, this is Parsimony ERP and we get one question over and over. Can you please tell me exactly what parsimony does? Well, we'll try but this only a 30-second spot so we're going to have to hurry. Connect to your seller central account and pull all the new orders, enter the orders with all customer data, enter all of the Amazon fees and charges, store them at the item level, generate profit loss reports at the SKU level, automatically generate income status, handle multiple companies, handle multiple brands, handle multiple currencies, facilitate budgets and forecasts so all customer interactions are in a sophisticated CRM system. Hey, you get it. That's Parsimony P-A-R-S-I-M-O-N-Y.COM. Parsimony.com , we've got that. You're listening to the Awesomers podcast.

17:22 (Steve quotes his favorites lines in the book, E-Myth)

Empowery, the name says it all. Connecting eCommerce entrepreneurs with great people, ideas, systems and the services needed to sustain business dynamic into growth. Empowery is a network; a cooperative venture of tools and resources to make you better at what you do. Because we love what you do. We are you. Visit Empowery.com to learn more. You're listening to the Awesomers podcast.

Well, we've done it again everybody. We have another episode of the Awesomers podcast ready for the world. Thank you for joining us and we hope that you've enjoyed our program today. Now is a good time to take a moment to subscribe, like and share this podcast. Heck, you can even leave a review if you wanted. Awesomers around you will appreciate your help. It's only with your participation and sharing that we'll be able to achieve our goals. Our success is literally in your hands. Thank you again for joining us. We are at your service. Find out more about me, Steve Simonson, our guest, team and all the other Awesomers involved at Awesomers.com . Thank you again.